A team of engineers from Newcastle University, UK has invented a cool new gadget: a prosthetic hand that can see.

Basically, it’s a bionic hand with a camera attached to it that “instantaneously takes a picture of the object in front of it, assesses its shape and size and triggers a series of movements in the hand,” according to Newcastle University.

Traditional prosthetic hands need the wearer to physically stimulate the muscles of their arm to initiate its movement, and this process takes time and practice, and isn’t as natural as real hands. With this device though, the wearer can easily reach for an object and automatically grab it. 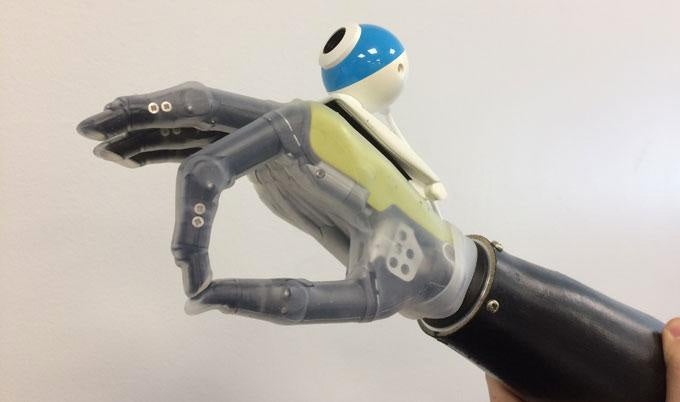 The prosthetic hand “‘sees’ and reacts in one fluid movement,” said the researchers. “The hand ‘sees’ an object, picks the most appropriate grasp and sends a signal … all within a matter of milliseconds and 10 times faster than any other limb currently on the market.”

The device has already been tested with a few amputees. Now, they’re working with the Newcastle upon Tyne Hospitals NHS Foundation Trust to offer the device to its patients. The researchers aren’t done yet though, as they wish to improve it by developing a way to make the hand also sense pressure and temperature and transmit that information to the user’s brain.

Prosthetic limbs haven’t really changed in the past century, so this is a great improvement on the technology, said by Dr. Kianoush Nazarpour, co-author of the study and senior lecturer of biomedical engineering at Newcastle University, in a statement.

“The design is much better and the materials are lighter weight and more durable but they still work in the same way,” said Nazarpour. “Using computer vision, we have developed a bionic hand which can respond automatically — in fact, just like a real hand, the user can reach out and pick up a cup or a biscuit with nothing more than a quick glance in the right direction.”

UK Engineers Created A Prosthetic Hand That Can “See”

MIT Created A Robot That Can Teach Its Own Kind Engineers, There is a Lot to Learn From Tradesmen, Foremen,...