It’s a disheartening reality in India that around 100 million people in the country do not have access to clean drinking water. Moreover, there are more than 600 million people who do not get proper toilets and other sanitation facilities, hence defecating in the open. This exposes 100,000 tons of untreated, disease-carrying feces to the public, killing 450,000 people annually.

For this, an engineer from the United States developed a toilet that solves both problems, hitting two birds with one stone.

Northwestern University graduate Anoop Jain is an engineer who had a change of heart. In 2009, he quit his job and focused in helping India through an initiative he calls the Sanitation and Health Rights in India (SHRI), formerly Humanure Power. He is now one of its directors.

In their website, SHRI details its simple solution in providing for toilet users and water customers. 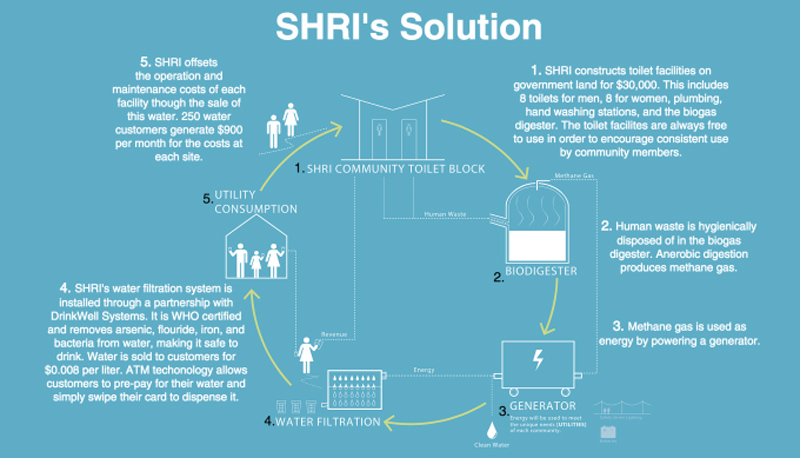 The SHRI community toilet block is composed of 16 toilets in all, 8 for men and 8 for women. It has facilities including hand washing stations and a biogas digester, which hygienically disposes the human wastes and converts them into methane gas through anaerobic digestion.

After the conversion, the methane gas is used as energy by powering a generator. This is used to meet the utility needs of the community, one of which is to power a water filtration system devised by SHRI.

Installed through a partnership with DrinkWell Systems, SHRI’s water filtration system is WHO-certified to remove arsenic, fluoride, iron, and bacterie from water, making it potable. It distributes about 100,000 liters of clean water every month.

Perhaps the best part is that the toilet is free for all to use, which caters to 3,000 to 4,000 people everyday. That’s despite the $30,000 total cost for each installation of the facility.

Water being produced by the filtration system, however, is sold to customers for $0.008 per liter. There is an ATM technology that lets customers pre-pay for their water. The profit that comes from this goes to the operation and maintenance of each facility. SHRI reveals that 250 customers of this system generate $900 per month for the costs at each site.

Jain’s philanthropic work of providing toilet and clean water started with he built a community soup kitchen to help Tibetan refugees in north India through a fundraising campaign. Through this endeavor, he realized the importance of improved public health as a means of empowerment, and proceeded working in rural India before reaching Bihar and forming SHRI there. This 18-Year-Old Math Prodigy is Already an Associate Professor at...